In the previous post we setup the necessary basic code to render a multi-colored triangle using Metal. By doing so we learned about the fundamental concepts of the Metal API:

We managed to render a triangle, which looks like this: 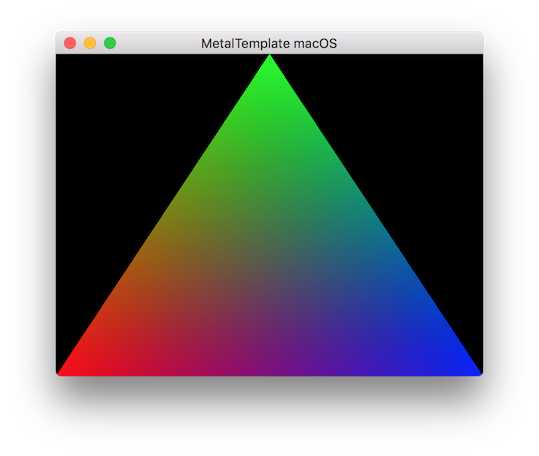 This post will build on top of the last post by adding what is called uniform data (or just uniforms) to the rendering process. Use your code from the previous post, or feel free to download my code and use it.

What is a uniform, and what is it good for?

Right now we can render a triangle, but the output of the rendering is always identical. Having the rendering output be different each frame is necessary for almost any real-time graphics application: for example, every 3D video game needs to move the camera around. In future posts we will actually look at moving the camera around in a 3D scene, but for now we will settle for something more modest; a triangle that changes brightness overtime:

to make the triangle a bit darker, and so on. Now, this strategy can work, but it's a poor way to go about it. Consider what happens if we have a ton of vertices to render complex shapes. To adjust the brightness of the complex shapes we would need to change the color data for all of the vertices using the CPU. The amount of work the CPU has to do grows linearly with the number of vertices, which is bad news when you want to have a complex scene with lots of vertices.

Now, this \(brightness\) variable is what we call a uniform. Like vertex data we use it in our shaders to affect the final pixel color, but it is uniform across all the vertices. While there are 3 vertices, each with different position and color data, there is only 1 \(brightness\) value. I like to think of it as a knob on the control panel of our shader: our shader will take in the vertex data and accordingly render a triangle, and the \(brightness\) know provides a way to adjust the brightness of the rendering output. And who is responsible for turning the knob? The CPU is.

Each frame the CPU can update the brightness, a single floating point number, to affect the rendering of the entire triangle. Much more efficient than modifying every vertex's color data!

Enough talk, let's get on with the code! We will start by first adding the code for our brightness uniform to the shaders. In pseduo-Metal-code, we want to write something like this for our fragment shader:

However, this isn't quite right for 2 reasons: the first is obvious, we need to define the variable brightness. The second reason will be discussed soon. So how do we define brightness? That is, how does the CPU pass data (the value of brightness) to the GPU? It works in essentially the same way as vertex data: we use a MTLBuffer on the CPU side, and a [[buffer(0)]] on the GPU side, just like the vertex buffer data that is passed to the vertex shader. First, crack open ShaderDefinitions.h and add the following struct definition:

This is a struct that will hold all of the uniforms that will be passed to our fragment shader. Right now it only contains one uniform, brightness. Then we can add it as a buffer parameter to the fragment shader, and use the brightness member of the struct to do the multiplication:

While this code isn't entirely foreign looking since it is similar to the vertex buffer parameter, there are some differences to walk through. Most importantly, we declare the buffer parameter to be constant instead of device because each pixel that is rendered will access the same memory location of the buffer (just the since brightness member). We also have the parameter be a reference (&) instead of a pointer (*). They are quite similar and both perform the role of referencing a location in memory, but references can't be used to reference an array of structs, just a single struct. We will not have an array of FragmentUniforms, unlike for the vertex buffer where we did have an array of 3 Vertex structs. Since we don't have an array here, we are free to use either a pointer or a reference or a pointer.

Finally, the multiplication is a bit more convoluted than just doing uniforms.brightness * interpolated.color. This is because the colors are in (r, g, b, a) format, and we want to make the color darker by decreasing r, g and b, but we want to leave a (the alpha value) alone. So we grab just the rgb components of the interpolated color, multiply those by uniforms.brightness, and repack the result into a float4 with the original alpha value.

This is all the shader code we need to write. If we run this now, we get the following crash:

This is perfect, Metal tells us directly that the fragment shader is expecting a buffer to be bound at index 0, and we didn't do that yet. Let's get to it!

Creating and binding a uniform buffer

Open up Renderer.swift, and first define a new buffer in the class:

Now in the initializer we need to setup this buffer. The buffer will contain the data for only one FragmentUniforms struct, so we don't use an array but just a direct pointer. Add this below the initialization of the vertex data buffer:

Now we need to bind our fragmentUniformsBuffer to the fragment shader. Just like the vertex data, we perform this binding every frame using the renderEncoder. Inside draw(in view: MTKView) we currently have the code:

This is where we bind the vertex buffer to the buffer at index 0 in the vertex shader. We do the same thing, but with the fragment shader and fragment uniforms by adding the following line before the drawPrimitives call:

And now, if we run the app, we get a triangle that looks identical to before. It is the same as before since we used an initial brightness of 1.0. We can quickly test that brightness actually works by manually changing the initial value from 1.0 to 0.5, which should give a darker looking triangle: 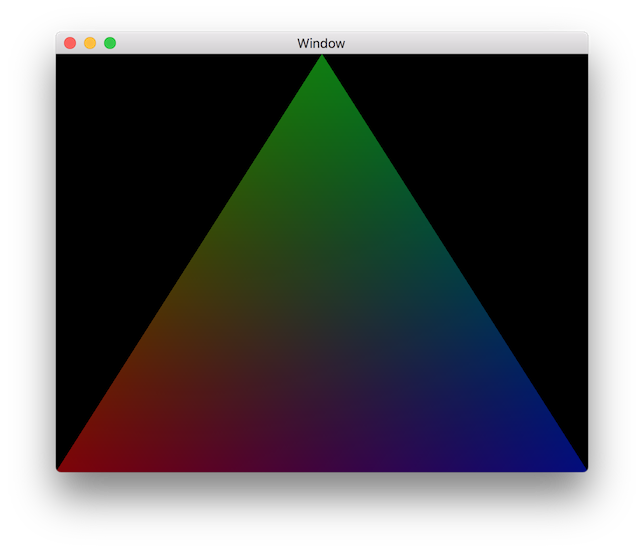 Once you are done experiment with it, set the initial value back to 1.0.

Right now we have uniform data being initialized on the CPU, and passed to the GPU. But what we really want to do is animate the brightness of the triangle, which means we want to modify the brightness uniform on each frame. The first thing we need to do is start keeping track of time, so that we can base the brightness off of the current time. Our strategy is:

We start by adding these instance variables to the Renderer class:

Now we just need to implement this update function to update the currentTime, and change the brightness:

Finally, we update the currentTime by adding the time difference. If you run this code now, you should see exactly what we were hoping for, a triangle with smoothly animating brightness:

Synchronizing the CPU and GPU

Unfortunately, the code we currently have is subtly bugged. The output looks fine, but there is actually a race condition that may or may not manifest itself in the future. It's actually an easy fix, but we need to understand what is happening in terms of CPU and GPU coordination.

Each time draw(in view: MTKView) is called (60 times per second), we use the CPU to update the uniform data, and then tell the GPU to go and render using that uniform data asynchronously. Let's lay the rendering of the first 3 frames in a timeline:

This is fine, and there are not really any problems with this. But what happens if our rendering starts to take too long? Something like this:

In the red highlighted areas, there is a big problem. The GPU is reading from the uniforms buffer while the CPU is simultaneously writing to it (remember, they both share the same physical memory). What exactly will happen here is anyone's guess: it could crash (though this would be far too forgiving), subtly introduce incorrectly rendered pixels, or have no visible effect. It's hard to predict, and hard to track down later. Ignoring this bug that isn't immediately affecting us is the embodiment of this meme:

(Image credit: KC Green, The Nib). The solution is to synchronize the CPU and GPU. What we want to ensure is that the writing to the uniforms buffer by the CPU can not overlap with the GPU's rendering. We accomplish this by using a semaphore. Let's code it really fast, and then explain how the code works. Add this instance variable to the Renderer class:

This creates the semaphore we will use. Then at the very top of draw(in view: MTKView) add:

That's all the code we need to add. Let's walk through how this exactly works. We first initialize the semaphore with a value of 1. Then, when we call wait one of two things happen:

So when draw(in view: MTKView) is called the first time, the value is 1, so wait changes the value to 0 and moves on. We then update uniforms and encode the drawing. Before the GPU starts drawing (commandBuffer.commit()), we add a completion handler that will call signal when the GPU is done drawing. All signal does is increment the semaphore's value by 1.

This means that the next time draw(in view: MTKView) is called the CPU will wait to start modifying the uniforms until the previous rendering is complete, which ensures that we do not read and write to the uniforms simultaneously.

The problem of enforcing synchronization between the CPU and GPU is not unique to uniform data: anytime that one of them is reading and the other one is writing (or they are both writing), then you must enforce synchronization. This is almost always the case with uniform data, but is not necessarily the case with vertex data. As always, the complete source code is available for download.